Skip, Her Predecessors and Dogs In General

The other day  my friend/neighbors son, Christopher asked, out of the blue, but in a VERY serious tone, “What would life be like, without dogs?”  Chris is of the “question asking” age as he travels the path of life, figuring out who he is, what he likes and how things work.  Most of his inquiries are quite serious. “How come my bike tires have tubes in them, but the tires on Moms car don’t?”  I can tell, he gives a lot of thought to the things he asks about.  Most times, I REALLY try to come up with the appropriate answers.  Explaining the mechanics of an internal combustion engine is far easier than some of the more philosophical questions he’s come up with lately!

I had a rush of memories of the companions I’ve been blessed with through the years,  while struggling for a quick but palatable answer for Chris.  “I’m not sure Chris” I replied. “I know without our white Shepherd Sugar, and Tammy the more traditionally marked Shepherd, my life would have been darned lonesome as a kid.   Without Bing and Trooper, my Step-Dads Beagles, my childhood would have been different”.  I recalled some of the canine pets who were a piece if my life,  growing up in Louisville and the years that followed.

There is a newspaper article, featuring Sugar and I at an AKC Dog Show in which we were entered that I will have to find and share.  I was four or five years old but still  have vivid memories of the wall full of trophies Tammy brought home in both “confirmation” and the “obedience” class.  “Bing”, one of the beagles used to sleep on top of the dog house (Dad said that he simply wanted to get away from the “riff-raff”, and though “Trooper” had excellent pedigree, he ended up being a big disappointment when it came to rabbit hunting. But he loved us kids.

My life in Louisville came and went.  In Boys Town, Luke, our Cottage #30 counselor had a beagle we gave him one year for Christmas.  I think my sophomore year.  He called her Banjo after a childhood pet HE had, and Banjo became the Cottage mascot with 21 young men to love!  All of us were always eager to return the favor!

Life in Boys Town came and went.  With Chris still waiting for an answer,  I remembered my Irish Setter, “Red”.  I came across Red during the stock-car racing days.  He’d obviously been abandoned out in the country near the track.  Overly thin, hair matted, filled with burs and uncared for, he hopped right in the front seat of the  ’72 Blazer when I offered.  I took Red under my wing, and he turned out to be an absolutely wonderful companion.  My most fun memory of Red aside from the hunting trips, was the time he stole two beautiful steaks from the kitchen counter as they were thawing.  Sigh.  They’d been set out, anticipating a “romantic” kind of meal I had planned.  If I recall, “we” went out for dinner that night instead!  Not Red and I.  The ex and I.   Even now, I laugh about that incident.  Only because she was in tears at the kitchen table while Red was in the living room finishing up a t-bone, when I came  home.  “See what YOUR DOG did!?”  Suddenly Red was “my” dog, instead of “ours”!  ANd it DID evolve that way.  I still had Red years after “the ex” moved on.

The set of English Pointers I was blessed with, provided me with MANY  memorable years in the fields of Nebraska, Iowa and South Dakota, chasing pheasants, grouse and quail all over the countryside!  I made a lot of new friends (the landowners).  Re-enforced a friendship I shared with my mentor, Phil.  While  most of my hunting cohorts preferred the popular breeds around Nebraska; Brittanys, Labs and the like, I HAD to be different, and invest my time with English Pointers.  I would have matched Troopers’ (named after my Step-Dads Beagle) sense of smell, or Skeeters (named after a hunting partners/room mates girlfriend) rock-solid points, against ANY bird-dog in the land.  Not to mention how good they were around friends and family when they weren’t “working”.  Those two dogs more than earned a few chapters in my scrapbooks through the years.  Poor Trooper, what she endured when Ashley was just a toddler!  They became inseparable.

Following the demise of Trooper who lived to be 14 years old, Ashley  and I went “dogless” for a while.  Wasn’t for lack of trying.  We adopted a Blue Tick Hound from the Humane Society Ashley named Roy.  Though a great companion on the road, Roy turned out to NOT have a drop of “hunting dog” running through his veins, which I think proved out to be ironic.   I still had the ’99 Western Star and was coming out of Colorado, en route to Columbus Ohio in the early Fall.  Bird-hunting season was in full swing in Kansas.  While I was in the truck stop, getting a shower and a meal, SOMEONE stole Roy from the truck;  Dog, leash AND food bowl!  The Sheriff I spoke to said that there had been a rash of dog thefts, primarily hunting dogs.  I told him maybe I’d get Roy back when they realized that all he ever hunted was the food bowl…  The hard part, was explaining to my daughter that someone had stolen her dog. 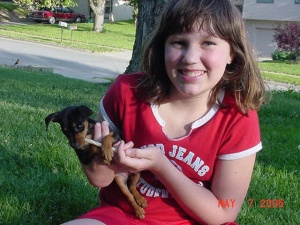 May 2005.  I had one or two more runs to make with my trade-in (the ’99 Star), before the 2005 Western Star was ready for the road.  Ashley and I got a new dog, before the new truck was ready.  But when it DID come in and was ready for its maiden voyage, we made sure Skip had her place in the bunk. Ashley came up with the name after a tear-jerker movie called “My Dog Skip” and there are many “Skip stories” to share in the future with 7 or so years with her at my side.

BUT to answer Chris’ question, I said simply.  “Without dogs, the world would be a lot emptier and a lot more lonely.  Dogs teach us about responsibility, companionship, loyalty and friendship.  They teach us about the simple, important things in life.  So I guess Chris, life without dogs would be unimaginable”.  I think it was Will Rogers who said:   “If there are no dogs in Heaven, then when I die I want to go where they went.”  How true!

All but the photo of Ashley and Skip are links to various “pet products” carried by the same folks who provide the services for my art.  We deeply appreciate your kindness and support in visiting the “stores” of these other artists and dog-lovers!

3 Responses to Skip, Her Predecessors and Dogs In General